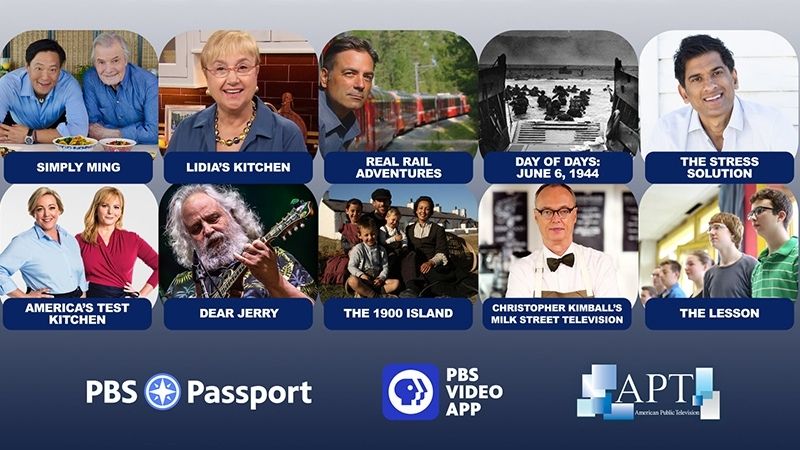 We are thrilled to announce that fresh, new content is on its way to CET Passport! Nearly 3,000 episodes of shows from American Public Television (APT) – especially food and travel, home and garden, dramas and more – will soon be available for our members to stream on the PBS Video App.

After that, 300-500 episode batches of APT’s programming will periodically be added to PBS Passport throughout the next 18 months. The new episodes will become available in November 2021, March 2022, June 2022, August 2022, late November 2022 and March 2023. We’ll be sure to update you on our blog as new shows become available.

“We are pleased to partner with PBS and share the wealth of the APT catalog, presenting current favorite series and episodes that will greatly expand the current Passport offerings through early 2023 and beyond,” says Cynthia Fenneman, president and CEO of APT. Prior to this partnership, some of APT’s content library was already streaming on Passport, including popular titles like The Best of the Joy of Painting with Bob Ross and The Indian Doctor, but the previously mentioned shows were unavailable.

Learn more about just a few of the shows coming on September 1, 2021, below and stay tuned for more updates:

D-Day at Pointe-Du-Hoc tells the remarkable story of the U.S. Army’s 2nd Ranger battalion. Led by Lt. Col. James Earl Rudder, the soldiers scaled the 100-foot cliffs of Pointe-du-Hoc in Normandy on June 6, 1944 to destroy six German cannons situated halfway between Omaha and Utah Beaches. Many believed it was a suicidal mission for the men involved. Narrated by actor David McCallum (The Man from U.N.C.L.E. and NCIS) and featuring interviews with surviving veterans from the Pointe-Du-Hoc assault, the documentary chronicles the dangerous and daring mission.

Packed to the Rafters

Packed to the Rafters is a dramedy that centers around Dave and Julie Rafter and their three children. On the eve of their 25th wedding anniversary, the couple thinks that they are finally about to have the house to themselves. But home is a very welcome refuge for their children when unforeseen problems occur.

Rick Steves’ Best of the Alps

Join Rick Steves on a new alpine adventure, with scenic train rides, breathtaking lifts, majestic glaciers, and unforgettable hikes. Featured destinations include the Dolomites in Italy, the Zugspitze in Austria, the Matterhorn, Jungfrau, and Appenzell in Switzerland, and the iconic Tour du Mont Blanc in France.

Lidia’s Kitchen is a testimonial to the importance of mealtime. Over the course of the series, Daytime Emmy-winner Lidia Bastianich conjures simple, seasonal and economical dishes with grace, confidence and love. She teaches viewers to draw on their roots, allow for spontaneity, and cultivate a sense of home in the kitchen. Filled with tips and techniques collected through years in the kitchen and at the family table, Lidia channels her passion for teaching into a fun and trustworthy curriculum of kitchen wisdom.

Not already a Passport member? If you donate at least $5 per month or $60 per year, your membership makes you eligible for CET Passport. Learn more at https://watch.cetconnect.org/passport/learn-more/.