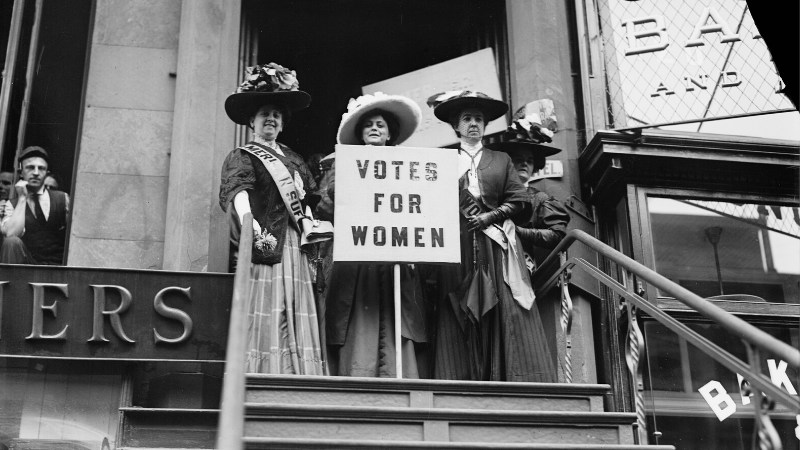 American Experience’s The Vote is a new four-hour, two-part documentary series that tells the dramatic story of the epic — and surprisingly unfamiliar — crusade waged by American women for the right to vote. Focusing mainly on the movement’s final decade, the film charts American women’s determined march to the ballot box and illuminates the countless social, political and cultural obstacles that stood in their path. The Vote delves into the controversies that divided the nation in the early 20th century –– gender, race, state’s rights, political power – and reveals the unruly dynamics of social change.

“The hard-fought campaign waged by American women for the right to vote was a truly transformative cultural and political movement, resulting in the largest expansion of voting rights in American history,” executive producer Susan Bellows said in a press release. “It’s also a story that has usually been reduced to a single page in the history books. The Vote restores this complex story to its rightful place in our history, providing a rich and clear-eyed look at a movement that resonates as much now as ever.”

Dramatic and thought-provoking, The Vote is, at its core, a story about power –– “who has it and who doesn’t want to give it up,” said constitutional lawyer and writer Michael Waldman. “We’re still fighting over who has that power.”

The Vote premieres Monday, July 6, and Tuesday, July 7, at 9pm on CET and ThinkTV16 and CET and ThinkTV are hosting a virtual early screening The Vote with a panel discussion on Thursday, June 25, at 7pm. Panelists will include Dr. Kimberly Hamlin, Dianne Herman, Valerie Lee, and moderator Mary Kate Genis. RSVP here: https://ovee.itvs.org/screenings/eo3qp. (We are grateful for the generosity from The Murray and Agnes Seasongood Good Government Foundation; The Stephen H. Wilder Foundation; and Francie and John Pepper for making this event possible.)

Here are additional details about the two parts of the film:

Part one traces the rise of suffrage militancy, a direct-action approach to politics inspired by Britain’s notoriously militant suffragettes. First introduced in New York by Harriot Stanton Blatch, the daughter of women’s rights pioneer Elizabeth Cady Stanton, and later championed by Alice Paul, a well-educated, singularly-driven Quaker of the movement’s third generation, the new, “unladylike” tactics heightened the movement’s visibility, as thousands of American women took to the streets to boldly demand their right to full and equal citizenship. During this time, the question of suffrage for African American women, already active in the movement, was seen as a liability in securing the full support of women and men in the former Confederacy. By 1911, “votes for women” had become, as one journalist noted, “the three small words which constitute the biggest question in the world today.” While galvanizing to many, such radical action was also divisive, stiffening the opposition and threatening to undermine the movement’s credibility.

Part two examines the mounting dispute over strategy and tactics and reveals how the pervasive racism of the time, particularly in the South, impacted women’s fight for the vote. Stung by a string of bitter state-level defeats in the fall of 1915, the suffragists decided to concentrate their energies on the passage of a federal amendment. One faction, under the leadership of the National American Woman Suffrage Association’s President Carrie Chapman Catt, was determined to pursue a moderate course and work within the political system, while another, Alice Paul’s National Woman’s Party, deployed ever-more confrontational and controversial methods of protest. The two efforts nevertheless pushed the movement to its crescendo in tandem and forever transformed the politics of social change in America.