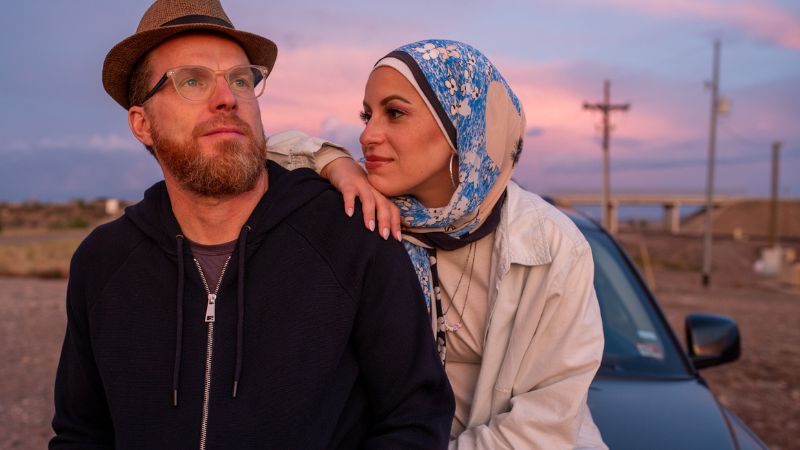 Buckle up for a cross-country journey along historic Route 66 in The Great Muslim American Road Trip. The three-part documentary, premiering on CET and ThinkTV16 on July 5, series follows a young Muslim American couple – rapper Mona Haydar and her husband Sebastian Robins – as they explore America’s “Mother Road” and its surrounding Muslim communities on a 2,500 mile drive from Chicago to Los Angeles.

Although they are practicing Muslims – Mona is Syrian American and Sebastian converted after meeting Mona – the couple, like most Americans, is unfamiliar with Islam’s deep roots in America. The road trip they embark on is the perfect opportunity for them to experience the breathtaking panoramas and iconic roadside attractions that have made Route 66 famous while learning about the history of their faith and what it means to be Muslim in America today.

“PBS is excited to share Mona and Sebastian’s journey along iconic Route 66, highlighting the diversity of Muslims in the United States,” Bill Gardner, Vice President of Multiplatform Programming & Head of Development at PBS, said in a press release. “Muslim culture has always been a part of American history, a fact that The Great Muslim American Road Trip explores throughout the heartland and its vibrant Muslim communities.”

Their conversations uncover the deep roots and impact of Islam and Muslims in American history and culture. By the time they reach the West Coast, the couple have a better understanding of themselves, their relationship and the centuries-long Muslim experience in America.

“Who knew that one of the first non-indigenous people to set foot in North America was a Moroccan explorer or that a Syrian camel driver helped survey the very road that has provided millions of American tourists their kicks on Route 66?” Alex Kronemer, director and producer of The Great Muslim American Road Trip, said in a press release. “It was an amazing and always-surprising experience to join hip-hop sensation Mona Hayder and her husband Sebastian Robins as they explored both their Muslim roots and Route 66. People will never view Muslim Americans the same way again.”

So, who are Mona and Sebastian?

Mona Haydar and Sebastian Robins first gained national and international attention for their 2015 “Ask a Muslim” project—a booth offering free donuts in exchange for dialogue and questions in the wake of the Paris and San Bernardino extremist attacks. A few years later, the video for Mona’s hip-hop anthem, Hijabi (Wrap My Hijab), went viral, gaining more than 8 million views on YouTube, and was named one of the “20 Best Protest Songs of 2017” by Billboard. Together, the couple has been featured on NPR, CNN, The New York Times, BBC, People Magazine, BuzzFeed, Marie Claire, Glamour, Refinery 29 and more. Sebastian has a background in education and a passion for sustainable farming. Mona has a master’s degree in Christian ethics and is a fierce advocate for civil rights and inclusivity.

Get a peek into what each episode of the series focuses on below:

Episode 1: Life is a Highway: Chicago to Joplin, Missouri
Tuesday, July 5, at 10pm on CET, ThinkTV16, the stations’ livestreams and the PBS Video App

On the first leg of their big adventure, Mona and Sebastian discover Muslim stories from America’s heartland, a history dating back to the 1800s. Along the way, however, their relationship hits a few bumps in the road. Will this be the second honeymoon the couple is hoping for?

Episode 2: A Bridge Over Troubled Waters: Tulsa to Albuquerque, New Mexico
Tuesday, July 12, at 10pm on CET, ThinkTV16, the stations’ livestreams and the PBS Video App

Mona and Sebastian learn why so many African Americans converted to Islam in the early 20th century, how Muslims contributed to modern jazz and why Catholics and Muslims share an affinity for the Virgin Mary. Later, they meet young Muslim robotics students aiming to solve big challenges with technology. Mona and Sebastian celebrate their anniversary on the mountaintop where they met, but as the road takes its toll, stress breeds trouble.

Episode 3: Back on the Road Again: Arizona, Nevada, California
Tuesday, July 19, at 10pm on CET, ThinkTV16, the stations’ livestreams and the PBS Video App

As their three-week journey winds down, Mona and Sebastian visit the grave of a famous Syrian-born camel driver, find traces of America’s first Muslim explorer from the 1500s and stumble upon an unexpected community of Muslims living in Las Vegas. The Grand Canyon helps heal relationship rifts that have been growing over the past 2,000 miles.The Great Muslim American Road Trip premieres Tuesday, July 5 and will air on Tuesdays through July 19 at 10pm on CET, ThinkTV16, the stations’ livestreams and the PBS Video App.