Notes From an Intern’s Cubicle 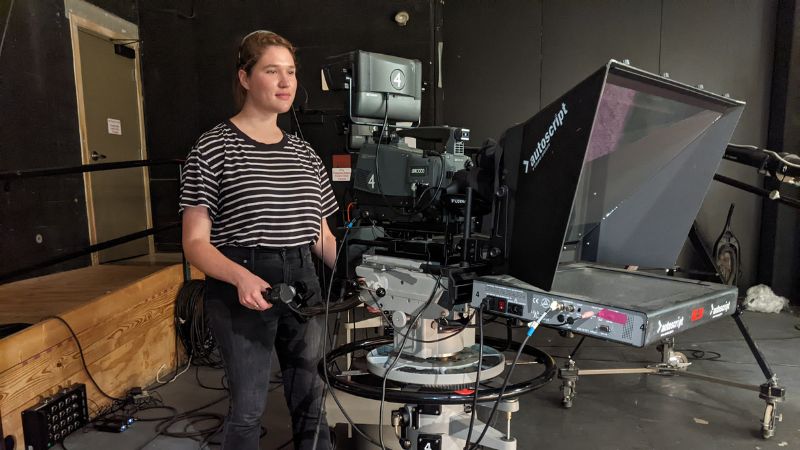 What is it like being an intern at CET and ThinkTV? Take a look into Nadya Ellerhorst’s first month as a Communications/Production intern below:

I’ve done a lot of challenging things as an intern at Public Media Connect – fetching equipment, writing captivating social media posts, coming up with really good puns… but boiling down a month’s worth of experiences into a concise blog post is putting me to the test. There’s no internship quite like one with CET and ThinkTV, so hang tight while I walk you through it. A lot of distinct worlds coexist at the CET studios building in downtown Cincinnati, my primary location of work, and I’ve been lucky enough to have direct access to a lot of them.

There’s the quiet office where desks are occupied by individuals doing everything from sending emails to editing videos. In the adjacent hallway, there are the control rooms, complete with a humbling array of buttons and knobs and Sesame Street plushies, and the door that leads to post-production spaces. Walk the length of the corridor – AKA Angelina Ballerina Alley –  and you’ll reach the education offices.

There’s the prop room where cameras and lights are stored and where set pieces and signs accumulated over time hang on display, including skeleton decorations, clearly the remains of previous interns. 🙂

Not counting all of the work that’s done on location, there’s massive Studio A with its eye-burning, near floor-to-ceiling green screens; Studio B, where the production team is hard at work building a puppeteer-friendly recording studio set for an upcoming $martPath episode; and Studio C, where SHOWCASE with Barbara Kellar is filmed, and where I got to operate studio camera (a Grass Valley LDK 3000, just in case you were wondering) for the first time – fancy headset included!

And of course, there is my cubicle, where I type away (maybe a little too loudly) and stifle the urge to spin around in my office chair whenever I’ve got writer’s block.

Needless to say, with this nuanced territory has come a variety of adventures.

On the third day of my internship, I walked into the prop room and found myself face-to-face with a disemboweled Lamborghini – child-sized, mind you – with a sharply-dressed puppet as its passenger. 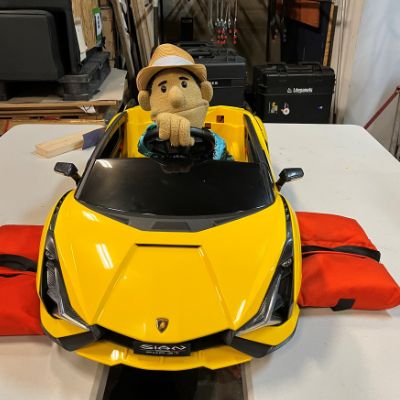 Indeed, it hadn’t even been a week, but by then I had come to terms with the fact that these sorts of occurrences might prove commonplace here.
Case in point? A few weeks later, and I wandered into Studio A and was greeted by this scene: 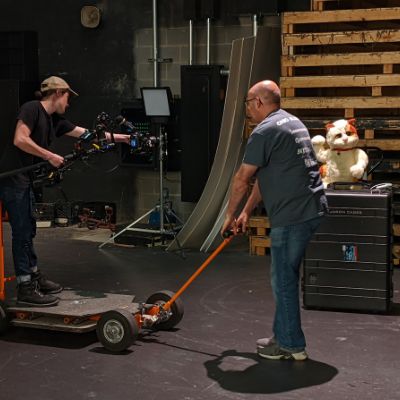 Here, Will and Jason were testing out a fascinatingly-mobile camera contraption, including a crane, in order to get an idea of the most-effective ways to film $martPath’s puppet stars. Jason also gave me a fascinating backstory on Scarcity Cat and a demonstration of puppet mechanics. Did I mention that puppets are referred to by first name? And that they have their own Green Room? And headshots? 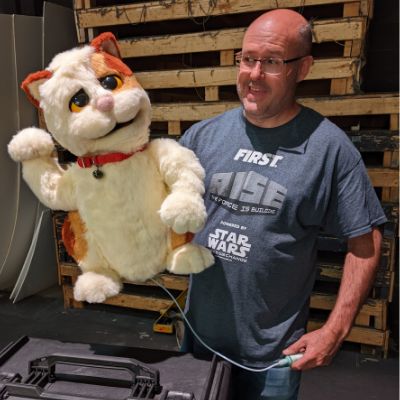 During week four, I got to witness first-hand the elongated processes of set-up for cameras (we used seven), lighting and mics, and as well as the importance of emergency preparedness after a coworker almost got zapped by a fussy studio light (he’s fine). That day, Producer Ann Rotolante also gave me valuable insight into the many responsibilities associated with a producer role – and The Art Show stickers!
I also managed to get a selfie with local television personality and host of The Art Show, Rodney Veal, refine my camera skills further and learn the delicate art of operating a teleprompter. 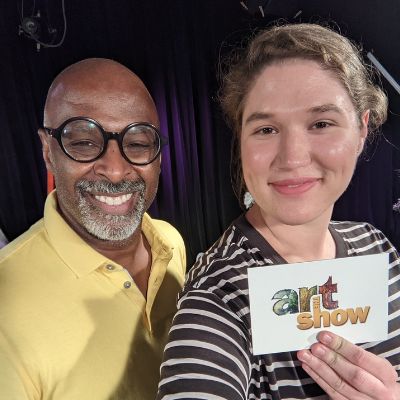 Of course, with new learning opportunities come possibilities to make mistakes, and I’ve admittedly had a million nightmare scenarios play out in my head over the last few weeks. I have yet to knock over a camera, audibly sneeze during a perfectly good take, cause my computer to combust from the volume of tabs I have open or spill a piping-hot beverage on the talent – check back with me next week – but for any fear on my part, the biggest blunder I’ve made so far is working on The Baking Journal in the hours preceding lunchtime. (Talk about being hungry!)

In addition to the hands-on things I’m learning, I’ve also found that the people at Public Media Connect, no matter their area of expertise, take the time and effort to get things just right for viewers, whether it’s trying a myriad of different ways to mount a single light or researching that perfect word to describe an episode. It’s the fine details that seem to drive everyone here and each individual approaches their responsibilities with that same level of passion and care as they all work together to keep this station functioning.

I could also write a whole other blog post – nay, book – on the sense of community that pervades the hallowed halls of this establishment, a sense of community that also manages to manifest itself on Slack exchanges and video calls with my colleagues at ThinkTV up in Dayton. It doesn’t really matter what department or station you’re associated with here – people know you by name and are guaranteed to strike up an interesting conversation. If you forget your water at home, they’ll gladly give you their extra bottle of lemonade. They’ll always allow yours truly to follow them around like a sad little intern duckling, giving me the rundown on how everything works. They’ll entrust you with voiceovers and script alterations and, yes, even blog posts, and, when you’re spontaneously asked to balance on a small step stool for some complicated task (see my previous blog entry), they’ll stand nearby just in case you fall.

And so, as I write this from the comfort of my cubicle, how can I help but feel excited about the weeks ahead? Indeed, I’ve gotten acclimated to my multifarious surroundings and the puppets that seem to lurk around every corner, but it always seems there’s something new for me waiting at Public Media Connect.