November Shows To Add To Your Watchlist

Home » Blog » November Shows To Add To Your Watchlist 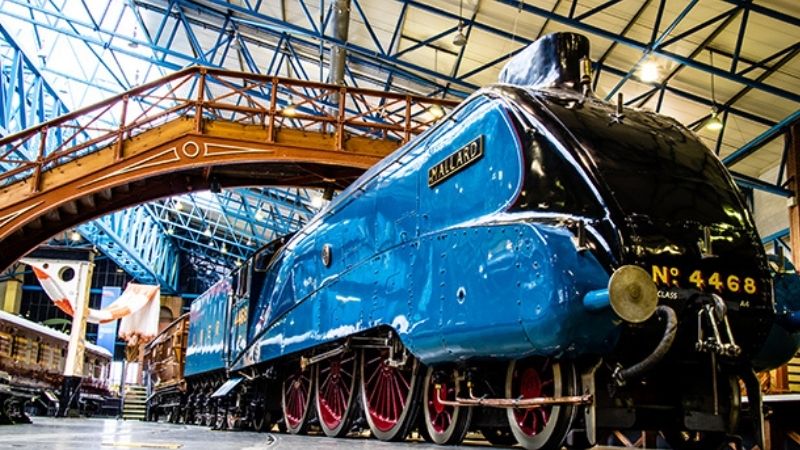 We have some great programming coming up this month and Chief Programming Officer Jim Wiener has the inside scoop on the shows you might not have heard about yet! Check out these program recommendations for the month below and mark your calendars so you don’t miss the airings (or get ready to stream them on the PBS Video App!)

Trains That Changed the World
Wednesdays, November 3 through November 24, at 8pm on ThinkTV14

Within 200 years, trains became the transportation that went hand in hand with the Industrial Revolution. It opened up how we travel, work, and how very heavy materials can be delivered to market. Horse drawn wagons were adequate for hauling crops to market, but tons of coal from Newcastle?  The horses threatened to strike.

The Brits were in the forefront of building train lines, and this four-part series looks at trains’ impact on speed, connecting cities (or go underground within city limits), industry and travel.

Great Escape: The True Story That Changed the World
Wednesdays, November 3 through November 17 at 9pm on ThinkTV14

A classic viewer favorite is the movie Great Escape with Steve McQueen, James Garner and Richard Attenborough, and it will air November 6th at 8pm.

In the meantime, take in the real life events upon which the movie was based. Great Escape:  The True Story is a three-part account of Allied airmen at Stalag Luft III who built three tunnels (code name Tom, Dick and Harry) and prepared for 200 men to escape.

The Escadrille was part of the French Air Force in World War I (otherwise known as the Armee de l’Air”).  And while French officers ran it, their pilots were predominantly American.

These pilots largely came from well-to-do families, and they had the money to learn flying and even own their own plane.  But when WW I broke out, and the American government remained neutral for another three years, these men chose to fly for France, just as the Flying Tigers saw American pilots join the Chinese Air Force shortly before Pearl Harbor.

We get to know many of the characters, and then, sadly with each mission, one or two would meet their end.  This ends with present day France, and how it still honors their American compatriots with Lafayette Escadrille decals on their modern fighter jets.

Finally, a movie was made about this aviation unit. Lafayette Escadrille was a 1958 William Wellman production.  It was somewhat forgettable, but one scene stood out.  The pilots had down time and played baseball.  A short pitcher proceeded to bean a tall batter, who then gives chase.  The short pitcher was actor Tom Laughlin, best known for his Billy Jack movie franchise.  The tall hitter?  An actor still a year away from regular work on a TV series called Rawhide, Clint Eastwood.

When Patsy Cline Was Crazy
Saturday, November 6 at 9pm on ThinkTV16

Okay, not the best title as it gives the impression Ms. Cline served time in an asylum.

But this documentary covers this country all-time great—a self-taught singer with a very distinct voice with precise phrasing… and plenty of emotion to go with it.

Ken Burns’ Country Music had Willie Nelson tell the story of his drinking with Patsy’s husband and badgering him about having her sing a new song he wrote.  Cline relented, so they drove to the Cline home late night.  Nelson remained in the car and eventually got the nod to come in.  Willie played the song, Patsy liked it, and “Crazy” became one of her many monster hits.

In March 1963, Patsy Cline died in a small plane crash along with performer Cowboy Copas (who sang live on WLW radio back in the 1930’s).  Her legacy remained strong as evidenced by the release 42 years later of her greatest hits album.  It cleared 10 million copies.

The legendary director has plenty of side projects which he gets to between his feature films.  One is this story.  In 1824, New Yorkers were to witness an entertainment they had never seen before.

Let me stop you right now and say no to your first guess.  It wasn’t Joe Franklin’s talk show.

It was Italian opera.  And it was an event that Mozart’s very own librettist helped organize.

Now I don’t know what passed for entertainment back when Central Park was grazing land for sheep 34 years before it was made into an actual park.  In 1824, there was a famous riot– in Greenwich Village of all places– between Iron Protestants and Catholics.  New York was one of America’s earliest wild and wooly frontier towns.

But 1824 was also the year the city welcomed French General Lafayette.  Maybe he told his hosts “An opera?  Oh yea, we have ‘em in Paris.  Two thumbs up– check it out!”

The opera took place in Scorsese’s childhood church, and this watershed event was lost to history of nearly two centuries.  But the “lost oratorio” was rediscovered, and restaged…

Hopefully with audience members not armed with rotten fruit and sheep organs.

An Emmy-winning ThinkTV production that has been distributed nationally and will air on over 100 stations nationwide this month.

You may know the story:  the B-17 Flying Fortress became an iconic World War II bomber that survived its mandatory 25 missions, then came home as its crew sold war bonds.  It became the subject of a 1944 William Wyler documentary and a feature film in 1990.

The bomber was almost lost to the scrap heap when the city of Memphis bought it, refurbished it, and put it on display outside near the National Guard armory. But years outside saw the bomber deteriorate from the weather and vandalism. After an attempt to repair the plane in Memphis, the plane was then disassembled and moved up to Wright-Patterson AFB in Fairborn, where a crew reassembled it and renovated it with the proverbial fine-toothed comb.

This documentary, done by ThinkTV staffer Richard Wonderling, covers all the bases of the Belle’s mission. But what really is fascinating to me were the workers who needed 13 years to restore the plane. Understand that spare parts weren’t exactly sitting around in boneyards.  Many parts had to be remade to spec—usually from scratch, and then how do you manufacture a few more thousands of those bolts?

It took Michelangelo four years to paint the Sistine Chapel.  It took these workers 13 years in a hanger to restore the Memphis Belle.

This is the heart-warming story of James Schmidt’s WWII service, and his grandson’s efforts to tell his story via social media.

A real eye-opener awaited Henry DeHoop. Imagine learning that your grandfather enlisted after Pearl Harbor… at the age of 14!  And he was a member of the 82nd Airborne to boot! Schmidt was injured during the invasion of Sicily, and was sent home when his true age was discovered. Undaunted, Schmidt jumped back in with the Navy and Merchant Marines—still before he was 18—then officially rejoined the Army when he became of age. Liev Schreiber narrates.

A depression era family moved from Kentucky to find work in southwest Ohio.  Over decades, their old-time music connected them to their ancestral home and proved to be the thread that tied generations together. Real musicians became actors in this film from co-producer/director Dale Farmer.  The mountain music is terrific, and it’s an endearing story that makes it suitable for air around Thanksgiving and Christmas when families get together.

Local production about the Suffrage movement in Ohio. Historians tell us that the movement officially got its start at the Seneca Falls convention in 1848, but Ohio women were organizing along with the Abolitionist movement over a decade earlier.

History was made in all four corners of the state, including Sojurner Truth’s “Ain’t I A Woman?” speech at the 1851 Women’s Rights Convention held in Akron.

The UCC (Urban Consulate of Cincinnati) continues to set the topics and invite area movers and shakers, thinkers and influencers to throw in their $15.85 (two cents adjusted for inflation).  “Education & Equity” is this month’s focus, and once again, Naimah Bilal with host and orchestrate.

Two-part series on the place they call the Ritz for a reason.  Maybe this was the inspiration for the Three Stooges short where the guys enter the Hotel Costa Plente, and are cautioned that “this Ming vase is worth five thousand dollars!” (and we count from 10 the time it takes for one of them to turn it into shards for the bottom of a planter).

The Brits do a fine job with their behind-the-scenes looks at businesses that cater to the famous faces and very well-heeled.

WBCN and the American Revolution
Saturday, November 20 at 9pm on ThinkTV16

In Cleveland, it was WMMS, the Buzzard.  In Cincinnati, it was WOXY. In the 1970’s, FM stations branched out with several music formats like AOR (Album Oriented Rock), Alternative Rock or Underground Rock. These formats set them apart from competitors still stuck in Top 40 mode, and instantly made them cool with high school and college students.

The station that arguably led the way was WBCN, aka “The Rock of Boston.” It went from classical to rock in 1968, and became legendary for putting bands on the map, all this against a backdrop of turbulent change with anti-war and civil rights movements and an emerging counterculture.

Independent Lens “Home from School: The Children of Carlisle”
Tuesday, November 23 at 9pm on CET

Northern Arapaho tribal members journey to Pennsylvania to retrieve the stories and remains of children who died at the Carlisle Indian boarding school in the 1880’s. Jim Thorpe was perhaps the school’s most famous graduate, and became a football star there.

This school opened in 1879 as the first government run boarding school for Native Americans. Its mission was forced assimilation, and its approach was adopted by other Native American schools across North America. Kids learned a vocation, but they were forced to speak English and drop their native language and customs. Hundreds of students died while at the school, and their bodies were returned to their families. But the remains of over 180 kids are still buried on the school grounds.

There’s that neighbor who has white hair, a white beard, and is a little chunky. He gets that inevitable comment: “He could make a good Santa Claus.”

Welcome to a room full of men who look the part. This follows six would-be Santa Clauses as they take an intensive workshop to learn to walk the walk, talk the talk, and dress like a bona fide St. Nick. And with the right training and on-the-job experience, who knows, they may convince themselves that– if not Santa– they’re at the very least in the ballpark with  Edmund Gwenn, aka Kris Kringle in the original Miracle on 34th Street.  No better Santa than that.

And the reason I say that is that NOBODY can be jolly 24/7.  Santa had responsibilities, and Gwenn’s character was a stickler for details. The reindeer go in a precise order, no drinking on the job, and if some crackpot company shrink dares to doubt you, knock him on the head with your cane!

To be sure, Santa was a jolly soul. But he also didn’t suffer fools gladly, and certainly not non-believers!