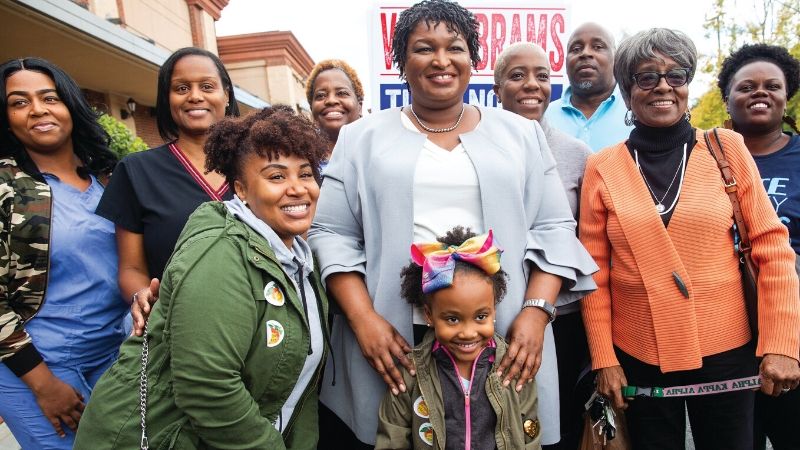 In a polarized America, where the dual forces of white supremacy and patriarchy often reign, a game-changing transformation is happening at the grassroots. And She Could Be Next – a two-part documentary series directed by Peabody Award-winner Grace Lee (American Revolutionary: The Evolution of Grace Lee Boggs) and Iranian documentary filmmaker Marjan Safinia (Seeds) – tells the story of a defiant movement of women of color who are transforming American politics from the ground up.

The documentary series, filmed from 2018 through 2019, follows forward-thinking candidates and organizers across the country, asking whether democracy itself can be preserved —and made stronger— by those most marginalized. The series is centered on individuals at the heart of the movement behind the New American Majority, including: Stacey Abrams (Georgia), Bushra Amiwala (Skokie, IL), Maria Elena Durazo (Los Angeles, CA), Veronica Escobar (El Paso, TX), Lucy McBath (Atlanta, GA), Rashida Tlaib (Detroit, MI) and Nse Ufot, Executive Director of the New Georgia Project.

“If ever there was a moment where we need to be reminded of the leadership of women of color, that time is now,” said Ava DuVernay, one of the film’s executive producers, in a press release. “If you’re an immigrant, a young person, a person of faith, or simply someone who has felt unseen for too long, you will find yourself reflected in this story.”

This is the first mini-series to be co-produced by POV, the longest-running documentary series on American television. The entire program will air as a two-night special presentation at 9pm on June 29 and June 30 at on CET and ThinkTV16 as part of PBS’ summer “Trailblazers” initiative celebrating the centennial of the women’s vote and illuminating the stories of modern women who continue to make their voices heard to bring about change.

Episode 1: Building the Movement
Monday, June 29, at 9pm on CET and ThinkTV16

The first episode of And She Could Be Next opens with the powerful reminder that “women of color have been the backbone of our communities forever.” An energetic montage of modern American civil rights movements–from women’s suffrage to Stonewall, Black Lives Matter to Standing Rock–brings us to the 2018 mid-term elections, where a new generation of women of color is ready to take the lead. The documentary goes behind-the-scenes at local rallies, war rooms and church basements, where candidates and organizers embark on the campaign trail. We also witness the unique challenges they face, from well-resourced incumbents to systemic barriers that disproportionately affect black, brown and immigrant communities. As we get to know these women, we see how they do not live “single issue lives” but are each a product of a larger movement – one that is coalition-based, inter-generational and inter-faith.

Episode 2: Claiming the Power
Tuesday, June 30, at 9pm on CET and ThinkTV16

Claiming the Power takes us to the weeks leading up to election day and focuses on how organizers combat voter suppression in their own communities. At the heart of the episode is a growing multi-ethnic coalition in Georgia, a state with a rich history of civil rights organizing and poised to be a “majority minority” state as early as 2025. In addition to the New Georgia Project, groups like Mijente and Asians for Abrams put boots on the ground to address language barriers, poll purges and “exact match” laws that impact thousands of voters across the state. As results roll in, there is celebration for some and disappointment for others, but for these community organizers, the work does not stop when the polls close. Through it all, these women present a collective vision of political power that is rooted in care, dignity and joy, and remind us that there is an organizer in all of us.