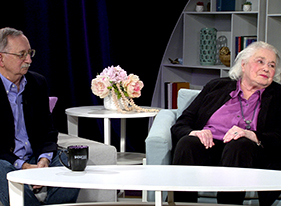 Accomplished musician Katie Laur moved to Cincinnati in 1966 and started “The Katie Laur Band,” pioneering bluegrass music. Katie was a prominent leader in her industry, bringing together local talent and also ran a radio show called “Music from the Hills of Home” on WNKU. Join us on this special episode of SHOWCASE to hear more about her story and her new book “The Red Dirt Girl”. 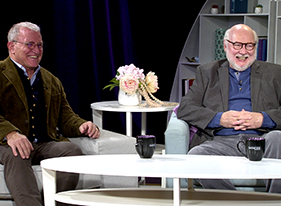 Kevin Grace is the author or coauthor of more than a dozen books written about Cincinnati and its rich history in sports, heritage, and culture. Richard Hunt is president of AdventureKEEN, ​​an independent nature and outdoor activity publisher. Join us on this episode to hear more about their stories and lives as author and publisher in Cincinnati.

About SHOWCASE with Barbara Kellar

Barbara Kellar hosts SHOWCASE with Barbara Kellar, an arts and cultural series airing on CET Arts and CET beginning June 17th. The weekly series, produced by CET, will highlight cultural luminaries, Cincinnati celebrities, the most important artists, and great performances. Each week enjoy in-depth interviews with the people who make this city move. Don’t miss sitting down with the Queen City’s cultural leaders and find out what’s happening around you. The series will offer unprecedented behind-the-scenes access to art organizations in Greater Cincinnati.

Barbara Weeks Kellar has served Cincinnati as a volunteer for more than 44 years – dedicated to serving the arts, youth and education. She hosts public television’s SHOWCASE with Barbara Kellar on CET, CET Arts and online, which features interviews on behalf of the arts community.

Mrs. Kellar’s involvement with CET began in 1967 when she participated in the first Action Auction. She was one of the first Auction volunteers and has been a volunteer ever since, serving as honorary chair of the 30th Anniversary Action Auction. She was instrumental in organizing the Auction Week Committee. And served on the Auction Executive Committee, as Auction Week Chairperson, as Connoisseur chairperson, and as a volunteer solicitor.

Mrs. Kellar has served in key roles with CET where she has won numerous awards including the President’s Award, a key to the City of Cincinnati, the Ohio Broadcasting Award for Development, the National Award for Excellence in Public Television Leadership and was honored at a 2010 Gala for her over 44 years of service to CET. CET’s annual “Barbara Kellar Award” is presented to volunteers who are dedicated to CET’s mission to educate, enrich and engage.