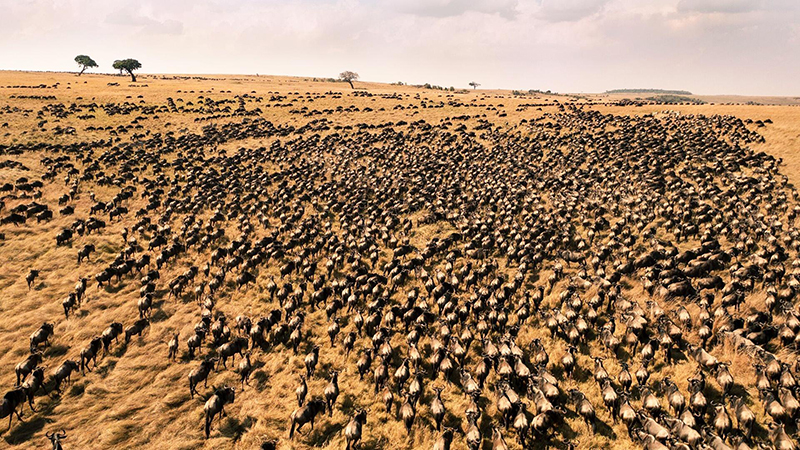 Kick off Nature’s 41st season with an amazing natural event that can be seen from space! We aren’t talking about a hurricane – we’re talking more than a million wildebeest running alongside zebra, gazelle and elands in their annual journey to find fresh grass. You can witness this spectacle on Wednesday, October 19, at 8pm.

The film follows two Maasai guides, Derrick Nabaala and Evalyn Sintoya, who have spent the last 10 years tracking the wildebeest as they migrate through Kenya’s Mara ecosystem. However, climate change, tourism and modern-day conflicts are threatening the delicate balance between the environment and wildlife. The Great Migration is part of the Maasai’s cultural heritage and Nabaala and Sintoya share new ideas for co-existence in a changing world.

“Wildebeest are a keystone species that support the entire ecosystem around them,” Fred Kaufman, executive producer for Nature, said in a press release. “Their conservation is critical to the survival of the natural landscape of East Africa. Our hope with this film is to shed light on the issues facing the Great Migration and spotlight possible solutions.”

New episodes of Nature continue throughout the fall with three other new episodes. Here’s the lineup, all of which can be watched on CET, ThinkTV16, the station livestreams and the PBS App.

Nature: Running with the Beest

More than one million wildebeest, along with zebra, gazelle and elands, journey in a quest to find fresh grass as they migrate through Kenya’s Mara ecosystem.

Examining Canada’s animals and dramatic landscape, from the high arctic and tundra to the boreal forests.

Two families explore the evolutionary journey of woodpeckers and the role they play in each ecosystem that they inhabit.

Biologists study the ocelot in South Texas, the most endangered wild cat in the U.S.

Check out the Season 41 preview below: