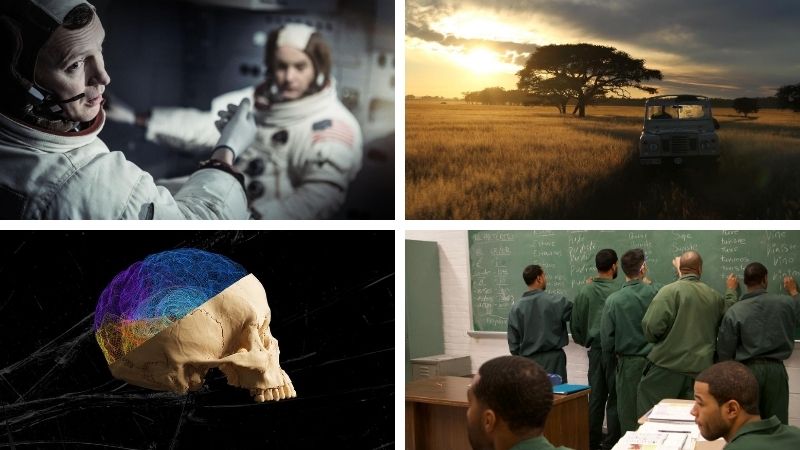 For the seventh consecutive year, PBS programs earned more News & Documentary Emmy® Award nods than any other organization, with 48 nominations from the National Academy of Television Arts & Sciences (NATAS). The nominations were announced on August 6, 2020, and the winners will be announced on September 21 and 22.

The PBS programs that received nominations include FRONTLINE (15), Independent Lens (8), PBS Newshour (7), POV (8), NATURE (3) and NOVA (3), among others. We have gathered just a few of the nominations that you can now stream either with ThinkTV/CET Passport or online for free:

8 Days: To The Moon and Back

College Behind Bars is the inspiring, emotional, deeply human story of men and women struggling to earn college degrees while in prison for serious crimes. In four years of study they become scholars, shatter stereotypes, reckon with their pasts, and prepare to return to society. A groundbreaking exploration of incarceration, injustice, race in America, and the transformative power of education. View the first episode above and find the rest of the series here: https://watch.cetconnect.org/show/college-behind-bars/episodes/.

Five years after the start of Flint’s water crisis, FRONTLINE exposes its hidden toll. Our two-year investigation traces how a public health disaster that’s become known for the lead poisoning of thousands of children also spawned one of the largest outbreaks of Legionnaires’ disease in U.S. history.

FRONTLINE: In the Age of AI

From fears about work and privacy to a rivalry between the U.S. and China, FRONTLINE explores the promise and perils of AI. The documentary traces a new industrial revolution that will reshape and disrupt our lives, our jobs and our world, and allow the emergence of the surveillance society.

Charm City is an intimate portrait of a diverse group of neighbors, including police, citizens, community leaders, and government officials who, with grit and compassion, survive in and work to improve their vibrant neighborhoods during a violent three-year stretch in Baltimore. There they face a complex web of social issues that are both nuanced and deeply entrenched, with no easy solutions in sight for a population that has been largely abandoned to fend for itself. Watch now with Passport: https://watch.cetconnect.org/video/charm-city-f2chlj/.

Travel back in time, from the Arctic Ocean to Pacific tide pools, with a pioneering group of scientists who make surprising discoveries that transform human understanding of nature and ecology. Based on a book of the same name, The Serengeti Rules had its theatrical premiere at Tribeca Film Festival and has won awards at the 2018 Wildscreen Panda Awards and Jackson Hole Science Media Awards.

Violence is all over the news. But some say we’re living in the most peaceful time in history. Journey through time and the human mind to investigate whether — and how — violence has declined. And witness how people are working to stop violence today.

To see the full list of nominations please visit: https://www.pbs.org/about/about-pbs/blogs/news/pbs-programs-lead-news-and-documentary-emmys-with-48-nominations/.